Last week I made a discovery that surprised both me and the translation team I was working with: that the ‘bean pods’ the young prodigal of Luke 15 wanted to ‘fill himself with’ neither the generic food scraps we might think, or the sloppy grain-husk-porridge people feed pigs with here but were the fruit of a tree very familiar to us in West Africa.

To be fair we are not the first people to have made this discovery since the information was sitting in dictionaries and translators’ helps waiting to be uncovered, but the fact is we were all so sure we understood what the boy fed the pigs that we didn’t even consider it might be wrong. 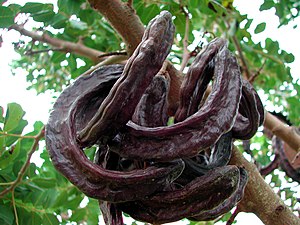 ‘Carob pods’, as the ones fed to the pigs in Luke 15; Photo from Wikipedia.

The Greek word is κεράτιον ‘keration’. Most English translations render this specific fruit with a generic term: pods (ESV, NIV84, NLT2004) or bean pods (TEV). The NET uses the more precise ‘carob pods’ but I wouldn’t have known what they were. The Hausa version many refer to uses the word dusa which is used for straw, thatching grass or chaff (cf Bargery). The problem for English is that this tree and its fruit are not known in English-speaking parts of the world. I don’t think I’ve ever heard someone talk about ‘carob’ except as something exotic and I would not have known what it was until doing some research on this passage. It is commonly classified as a relative of ‘bean’ plants so the generic ‘pod’ or ‘bean pod’ are justifiable, but the beans are very different from what English speakers would expect.

However, since the dictionary I first looked at (in Paratext software) included a picture it was immediately obvious to me that this was a fruit/tree very similar indeed to the common (African) locust bean. Indeed it is classified very similarly even if it’s not quite the same variety. Because the original term used was unfamiliar to English readership the best a translator could do was to use a generic term rather than communicate nothing. But then when subsequent translators come along leaning rather too heavily on the English, what should have sounded familiar gains the appearance of being generic or foreign. I wonder how many times known ideas have masqueraded as unknown ideas because the intermediate language English (or French) didn’t have a good term available.

This is a good lesson in the necessity of using original Greek and Hebrew combined with good dictionaries and other reference resources to help us join the dots when translating. Of course precision isn’t identical to accuracy. A pedant might object that if we render ‘keration’ as the local word for ‘locust bean’ then we are not 100% accurately identifying the plant, but they look very similar, and crucially are used for feeding animals (or possibly hungry poor people). When I showed the Ashe translators the picture of keration they identified it immediately as ‘locust bean’ and were indeed surprised that such a familiar fruit should have been hiding in this passage.

A flame tree, similar to a Locust Bean Tree, posing outside our front door with our family and our friend Kamande from Kenya

One of those seed pods up close

This reminds me of the story another translation consultant told me a few years ago about a team wrestling with an unwieldy phrase for ‘unleavened bread’, when in fact they had a simple single word for a grain-based food cooked without raising agent. Again diverted by the need to use a descriptive phrase in English, the translators failed to recognise this was something familiar being described as if foreign. Such are the perils of translation.

What do we take from this? We do all always need to be on the lookout for things in the Bible that:

The former is disappointing and the latter is rather more dangerous. (Less of an issue are truly foreign ideas which appear foreign and familiar things which seem familiar.) When something seems foreign we need to assess how foreign it really is and vice versa.

Finally: How much does it really matter

I don’t know. Perhaps this level of difference doesn’t really matter in the telling of a story. But on our journey into letting the Bible transform our understanding of the world and of its Maker-Sustainer, anything that appears more foreign than it should be risks distancing the story from us and diluting its impact. Foreign stuff sticks out and is a major distraction. That would suggest it’s helpful to restrict what’s notably alien to what really should be noticed. So the English versions are right and I think in Ashe at least we’ve plumped for a good translation too. But perhaps a Nigerian English translation should put ‘locust beans’ here. What do you think?

The comments are open, and there are moderators.